Rutherford County was the severely affected by the War Between the States. Shortly after the fall of Nashville in February 1862 Murfreesboro was occupied by Union Forces but Confederate partisans and cavalry continued to harass the Union army throughout the war.  The railroad from Nashville to Chattanooga was an important supply route so bridges and tracks were often attacked and destroyed.  In July 1862, news of Union atrocities against civilians and large Union supplies in Murfreesboro attracted the attention of Confederate General Nathan B. Forrest.  His capture of the city helped bolster his fame and create fear in Union forces.  Later that year, Confederate Gen. Braxton Bragg moved his army into Murfreesboro hoping to recapture Nashville.  President Lincoln ordered Union General Rosecrans to attack the Confederates and they clashed along the Stones River just north of Murfreesboro.  Although the battle was a draw, Gen. Bragg retreated south to a more defensible position in January 1863.  Murfreesboro remained under Union control for the remainder of the war and Fortress Rosecrans was constructed just northwest of the town. 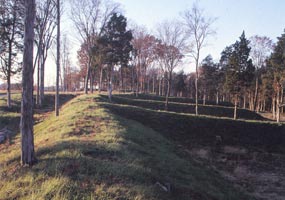