Murfreesboro SCV Camp #33 will be participating in two Christmas parades: Murfreesboro on Sunday December 8th, the parade starts at 2:00 PM. The starting point is the MTSU parking lot on Rutherford Blvd across from Alumni Drive. If you want to ride to the parade site on the float, meet at the County court clerk’s office on Walnut Street, park your car there and ride to MTSU on the float. The parade ends at the square so your vehicle will be close when the parade is over. We will be leaving for MTSU at 12:00 noon. Otherwise, park close to MTSU and hopefully someone can give you a ride back to you vehicle.

Be there in full Confederate Uniform or period dress if you want to march. Everyone else is invited to ride on the float.

I have the honor to be, very respectfully, your obedient servant,

The Rebel Banner
The newsletter of Sons of Confederate Veterans

Compatriots,
THIS MONTH IN OLD DIXIELAND!
April is here and the weather is getting nice outside. This is Confederate History Month and there were a lot of events during the War Between the States that happened in April. April 12, 1861, the war started in Charleston South Carolina with the shelling of Fort Sumter. April 6, 1862, the Battle of Shiloh started here in Tennessee. The war ended on April 9, 1865, at Appomattox. April 14, 1865, Union President Lincoln was assassinated at Ford Theater in Washington DC.
We do have a lot to be proud of as decedents of Confederate soldiers and every month is Confederate History Month in the hearts of all members of the Sons of Confederate Veterans.
Murfreesboro SCV Camp #33 was well represented at the Tennessee Division Reunion, a great time was had by everyone. The Shiloh Camp put on an outstanding event, especially since this was the first reunion any of them had attended.
We are going to place a bid to host the 2023 SCV National Reunion. 2012 will be hard to beat and set the bar for reunions since then. We have the experience and talent to make a memorable event. More details will follow. The bid will be placed in March of 2020.
Keep recruiting, the South needs all of her sons. Hooray for Dixie!
Ole

Camp Meetings
Murfreesboro Camp #33 is a descendant camp of the Joseph Palmer Bivouac No. 10 UCV, which was chartered on September 8, 1888. The meetings are on the fourth Tuesday of the month (except for December when it is on the second Tuesday) at 7:00 p.m. at the Heritage Center located at 225 W College St, Murfreesboro, TN. This center is operated by MTSU and houses the Tennessee Civil War National Heritage Area, the Center for Historic Preservation as well as several other groups.
Directions: from I-24, take exit 81-B, travel toward Murfreesboro to the Public Square. Go through the Square to the next traffic light at College Street, and turn left. The Heritage Center is located in the second block on the left, at the corner of College and Walnut.
Upcoming Speakers
Meeting Date
May 28 Terry Trigg
June 25 Rich Garcia

Submissions deadline for the May-June issue of The Rebel Banner is June 12.

Greetings fellows compatriots,
As we all know April is Confederate history month. It is more important than ever to live the charge and promote the true history of the South. We have been losing the narrative for years to the point that our own Southern people believe the lies as to the cause of the war. Social media, such as Facebook, is a great way to help promote our cause by sharing articles and the like. Please be careful to what you post or share and what I mean by that is don’t do it blindly if you haven’t read the article. As always feel free to share anything from our Camp Facebook page. This is a great way to reach all the people on your friends list and maybe they’ll share it too.
The TN Division Reunion was held on April 12 & 13 at Pickwick Landing State Park. If you’ve never been to one I would suggest that you do. This is where the business of the division is discussed and voted on. It was a beautiful location and great fellowship was had. The host camp, Battle of Shiloh Camp 1454, is to be commended for their excellent job.
In any organization communication is key to maintaining its health and growth. Please feel free to contact me with any issue you might have and I’ll do my best to help or resolve it. Keep recruiting new members whenever you can and feel free to bring guests to our meetings.
It is OUR duty to see that the true history of the South is presented to future generations. I remain your obedient servant,
James Forbes, Jr. Commander
SCV Murfreesboro Camp 33
Upcoming Events
Supports the preservation and maintenance of the Beechgrove Confederate Park and Cemetery Praters BBQ, 620 Woodbury Hwy, Manchester
April 27, Registration starts @ 9:30 a.m.; Kickstands up @ 11 a.m. (rain date May 4)

OUR CONFEDERATE DEAD
The current phenomenon of removing Confederate monuments, memorials, school names, etc. in our South is nothing more than visible proof of what we suspect, i.e., ignorance is king. Of course, we all know the eradication of all things Confederate is not the goal. The goal is the eradication of the United States, Western culture, capitalism and everything the “West” represents. The Confederacy is simply the low-hanging fruit. Watching the ignorance on display cements the fact that cultural Marxism is rampant in the United States.
The fact that “Southerners” are allowing it is even more perplexing and seems to prove the “Southerners” allowing it are, by and large, not Confederate descendants much less multi-generational Americans. They are, more probably, 1st, 2nd or even 3rd generation new Americans. They had no family here during our successful secession from the Crown. That may be debatable, and may not always be the case in each instance, but the simple fact remains, the ones allowing, aiding and abetting, and perpetuating it are also ignorant. Abjectly ignorant.
Here are a few facts you might want to consider, and we’d bet many of you just don’t know.


Place cursor at bottom of page to navigate document

Murfreesboro SCV Camp #33 has three big events coming up in December and ya’ll are invited to attend:

Saturday December 8th Eagleville Christmas parade 11:00 amstart time. Be at the Eagleville High school by 9:30 am and ride on the float to the staging area lot at North Main and Oak street. This way when the parade ends you will be back at your vehicle. “A Tennessee Christmas” is the theme for the parade. Period dress or Confederate uniform will be marching and everyone else can ride on the float.

Sunday December 9th, Murfreesboro Christmas parade 2:00 pmstart time. Be at the Rutherford County court clerk’s office, 319 North Maple street, by 10:30 am and ride the float to the staging area at the MTSU parking lot on Rutherford Blvd which is across from Alumni drive. Line up and starting point is Alumni drive. “A Christmas Story” is the theme for the parade. Period dress or Confederate uniform will be marching and everyone else can ride on the float. 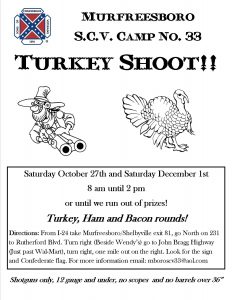